At Norwood Jewelers we offer a large selection of unique and custom made jewelry. Take a look at some of the individual selections on the pages below and then visit us in Ashland City, TN to choose or create your own piece. 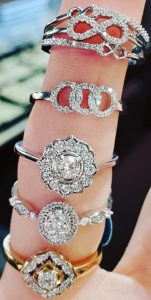 Most natural diamonds are formed at high temperature and pressure at depths of 140 to 190 kilometers (87 to 120 mi) in the Earth's mantle. Carbon-containing minerals provide the carbon source, and the growth occurs over periods from 1 billion to 3.3 billion years (25% to 75% of the age of the Earth). Diamonds are brought close to the Earth′s surface through deep volcanic eruptions by a magma, which cools into igneous rocks known as kimberlites and lamproites. Diamonds can also be produced synthetically in a high-pressure high-temperature process which approximately simulates the conditions in the Earth's mantle. An alternative, and completely different growth technique is chemical vapor deposition (CVD). Several non-diamond materials, which include cubic zirconia and silicon carbide and are often called diamond simulants, resemble diamond in appearance and many properties. Special gemological techniques have been developed to distinguish natural and synthetic diamonds and diamond simulants.